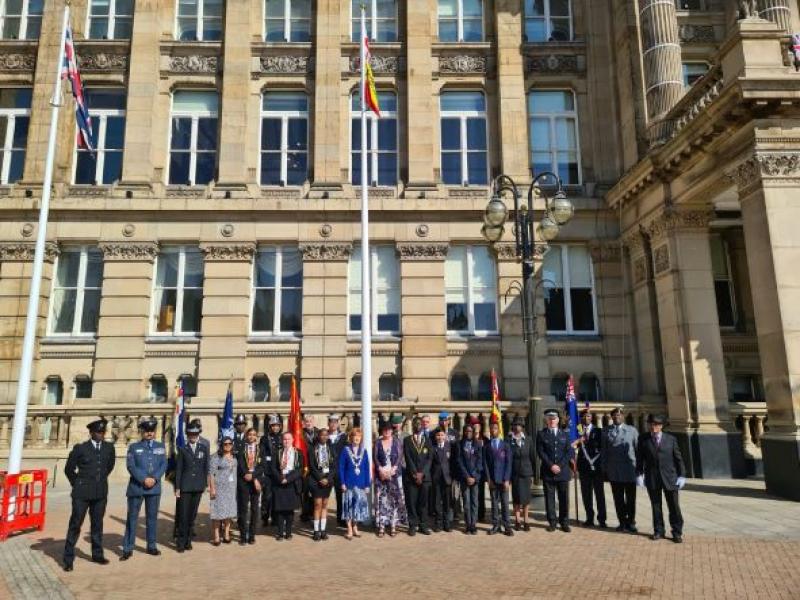 Flag raising outside Birmingham City Council launched National Windrush Day. The event was attended by current serving military personnel from the Navy, Royal Marines and RAF as well as veterans from the Army, Navy and RAF. Representatives from WMP included the Assistant Chief Constable who joined the Lord Mayor, Civil Servants and children from Holyhead School, City Academy and King Edwards Grammar School.

A live screening of the unveiling of the National Windrush Monument in London followed and the day concluded with a Windrush presentation and mini parade at the Back-to-Back houses in Hurst Street.

A Windrush Gala Dinner and Dance at Edgbaston County Cricket Ground held on 18th June paid tribute to Neil Flanagan WW2 veteran. A fashion show showcasing the Windrush era, Windrush Poem, military parade, live singing and a 3-course meal was enjoyed by attendees from all over the West Midlands, Crewe, Wales, London and as far afield as Florida USA. Councilor Ian Ward – Leader of Birmingham City Council, Public Sector workers including WMP, NHS, Civil Servants, Navy, Army and RAF were also amongst those giving thanks to those early pioneers who paved the way for others to follow.

The WAWI Project together with their community partners have been commemorating Windrush day for the past 14 years and Windrush 75 promises to be a bigger and better celebration.