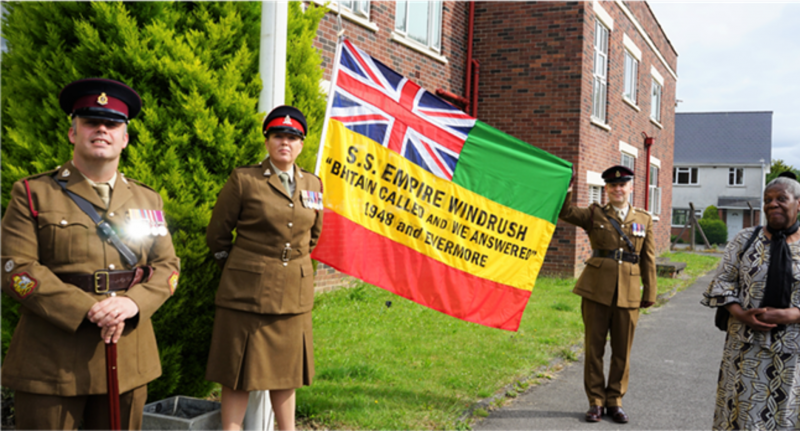 Mrs Roma Taylor (nee Greaves), founder of the Windrush Cymru Elders is a prime example of a forgotten British Army veteran and hero of her local community in Cardiff.  She came to the UK as part of the Windrush Generation and took up the vocation of a nurse within the NHS, like so many others in Britain’s hour of need.  In 1959, Roma joined 203 Field Hospital (formerly known as 203 General Hospital in the Territorial Army) as a Queen Alexandra's Royal Army Nursing Corps (QARANC) Nurse.  She combined her day job in the NHS with serving the nation (twice the citizen) in what is now known as the Army Reserve.  Roma spent 25 years serving Queen and Country, attaining the rank of Sergeant before finally leaving the service in 1984.

Roma unfortunately was never recognised for her veteran status until 2021, when Captain Huw Williams the Regimental Operational Support Officer for 203 Field Hospital came across her story.  He was determined to ensure Roma got the recognition she deserved for her service to this nation by successfully facilitating her application through the Joint Personnel Administration Centre.

It was therefore a great honour for the Commanding Officer of 203 Field Hospital (Colonel Simon Lawrence) to embrace the Windrush Flag Raising event at his Army Reserve Centre and to ensure Roma was the guest of honour.  It is testimony to those serving in the British Armed Forces that race, colour, gender or religion are not barriers to joining.  Similarly they will endeavour to rectify any injustices when identified to ensure the Armed Forces family is a strong community.