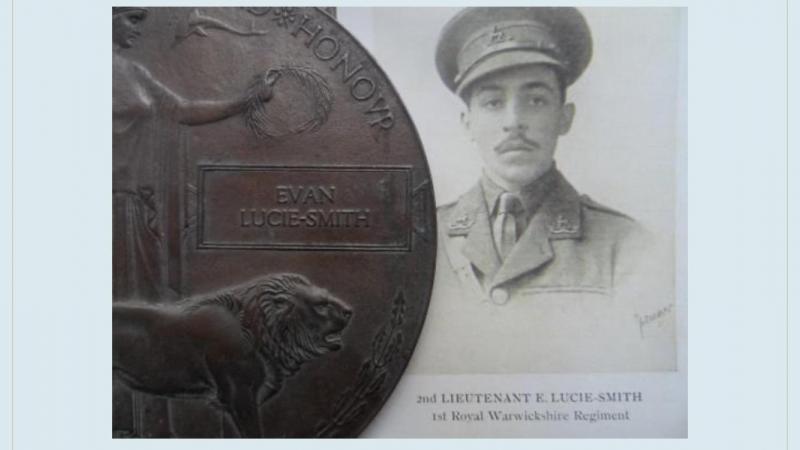 In November 2020 the Royal Regiment of Fusiliers Museum (Warwickshire) paid £10,540 to secure a plaque commemorating the man believed to be the first British regiment officer from an ethnic background to die in World War 1. That man was Lieutenant Euan Lucie-Smith and this is his remarkable story.

He was the youngest of three children born to Catherine (known as Katie) Peynado Lucie-Smith nee Burke and her husband John Barkly Lucie-Smith the Postmaster for Jamaica. John had been born in British Guiana but Katie’s family had been resident in Jamaica for several generations.

Katie was the daughter of solicitor Samuel Constantine Burke and it is believed that Samuel’s mother, (Katie’s grandmother and Euan’s great-grandmother) Elizabeth Staines Burke nee Mendes was a black Jamaican. Samuel himself was referred to as ‘coloured.’

Samuel was born in Jamaica on 10th February 1833 and went on to become a distinguished attorney at law, solicitor and advocate as well as a member of the House of Assembly. He died on 23rd May 1900.

Katie was born in St Andrew, Jamaica on 8th August 1862. She would spend the latter part of her life in England, in London and Sussex. By 1939 she was recorded as a widow of independent means, living at 8 Seafield Road, Hove. She died in 1950 in Kensington.

Euan’s dark-skin did not emanate from the Lucie-Smith side of the family.

The Lucie-Smith family was well-to-do and could afford to send Euan to school in England to undertake his education. He attended Berkhamsted school from May 1901 to July 1904 and later Eastbourne College. He is, along with others who served in World War 1, commemorated in memorials at both establishments.

Euan’s brother John Dudley Lucie-Smith also served in World War 1 and became an officer in July 1915, three months after the death of Euan.

Euan’s sister was Marie Dorothy Charley nee Lucie-Smith, born Jamaica on 7th September 1885. She died in Plymouth in May 1991.

Euan’s uncle, also Samuel Constantine Burke, was at the time of his death in 1953 reported in the British press as being the first Jamaican to attend Harrow. He was there at the same time as two future Prime Ministers of Great Britain; Winston Churchill and Stanley Baldwin. Clearly the Burke family were very wealthy.

However, despite the press reports, Samuel Constantine Burke senior beat his son to the distinction of being the first Jamaican at Harrow as he attended the esteemed public school in the 1850s before going on to study law at Cambridge.

The younger Samuel went on to become a Lieutenant with the British West Indies Regiment serving in France from 30th June 1917. The date he originally enlisted is unclear although it is extremely unlikely it was before Euan had done so.

Euan was commissioned into the Jamaica Artillery Militia on 10th November 1911 and served with them until the outbreak of World War 1.

At the onset of World War 1 Euan joined the Royal Warwickshire Regiment.

The Supplement to the London Gazette of 30th November 1914 announced Euan’s commission under the heading “The under-mentioned Candidates from the self-governing Dominions and Crown Colonies to be Second Lieutenants. Date 17th September 1914:”

Euan arrived in England in December 1914 and trained on the Isle of Wight.

He would go on to reach the rank of Lieutenant before his death.

Euan left England for France on 17th March 1915 to join the 1st Battalion of the Royal Warwickshire at the Front.

Tragically he was not to survive for very long. The Royal Warwickshire’s War Diary for 24th and 25th April 1915 covers the last few hours of Euan’s short life; “Orders were received to advance at 4pm [on 24th] via Vlamertinghe and halted outside Ypres from 8pm to midnight. Started to rain. Ypres was heavily shelled and on fire.”

Such was the hellish sight that faced Euan that night. We don’t know if he got any sleep but at 4.30am on 25th April, the order to attack was given. What followed was disastrous, the War Diary tells us “We attacked wood on the left of the line with 7th Argyll and Sutherland Highlanders, the Seaforth Highlanders, Royal Irish Fusiliers, Royal Dublin Fusiliers attached to our right on St Julien. Owing to the German trenches being insufficiently shelled and support unable to come up the line retired at about 7am to trenches near the farm. Our casualties were very heavy, 17 officers, 500 other ranks, killed, wounded and missing. “

On a day when one of the first black officers lost his life, the diversity of the British forces was further emphasised when, only a few hours later, the Lahore Division attacked the Germans on the left of the Royal Warwickshire’s but, the Diary tells us, they “gained very little ground, being stopped by gas.”

Euan is shown in the Diary as “Missing, probably killed.” Also listed are eight officers killed and two wounded and missing. Euan’s body was never recovered. An eye witness reported that he had been shot through the head. He is commemorated along with 11,390 other mainly British and South African troops at the Ploegsteert Memorial in Belgium. His name is recorded on stone 2K along with many others of the Royal Warwickshire Regiment. He is shown in his correct rank of Lieutenant, some references record him as Second Lieutenant.

The Diary at the end of the month of April understandably ends with “The Regiment was now somewhat shaken after the week’s work.”

Tragically only eight days after Euan’s death his father John Barkly Lucie-Smith passed away back home in Jamaica. News of Euan’s death had not yet reached the West Indies and John’s obituary in The Gleaner, believing that Euan was still alive, records that Euan was in the 1st Battalion of the Royal Warwickshire Regiment and “is now doing active service in Belgium, in the great European war.”

The only mercy is that John was spared the pain of learning of his son’s death.

John himself had risen to the rank of Major with the Jamaica Militia Artillery and in 1896 went to England in command of the Militia Contingent which represented Jamaica at Queen Victoria’s Diamond Jubilee in London in 1896.

When news eventually reached Jamaica that Euan was missing, the family still held out hope that he might somehow be safe. Euan’s mother wrote to the German authorities in desperation asking if her son was a prisoner of war. The answer came back that he was not.

Indeed the newspapers did not record Euan as ‘missing’ until it became beyond dispute that he was never coming back. It was not until 29th April 1916 that the Warwick and Warwickshire Advertiser formally gave the news that Euan was “missing, now believed killed.”

Euan was shown as living at 61, Avonmore Road, West Kensington, London prior to his death. He left a total of £125 6s and 5d to his next-of-kin, his mother Katie.

If Euan was a black officer it stands to reason that his brother John Dudley Lucie-Smith was too. Born in Jamaica on 22nd September 1885 he would also die there on 10th March 1943. His mother Katie was living in London at 24, Longridge Road at the time of John’s death.

John was a Second Lieutenant in the Royal Field Artillery 47th Brigade having been promoted to that rank on probation on 16th July 1915. He served in France from at least 21st November 1915 and. like his brother Euan, rose to the rank of Lieutenant on 1st June 1918. Unlike his brother he survived the War and his address in 1922 was shown as Glyn Mansions, 21 Avonmore Road, London W14. He travelled widely and also received an OBE and the King George VI Coronation Medal, the latter while working as a Puisne Judge in Kenya.

Thus we have described the lives of two brothers, both classed as black. One survived the War, the other did not, both were heroes.