A career as a reservist helped member achieve civilian success 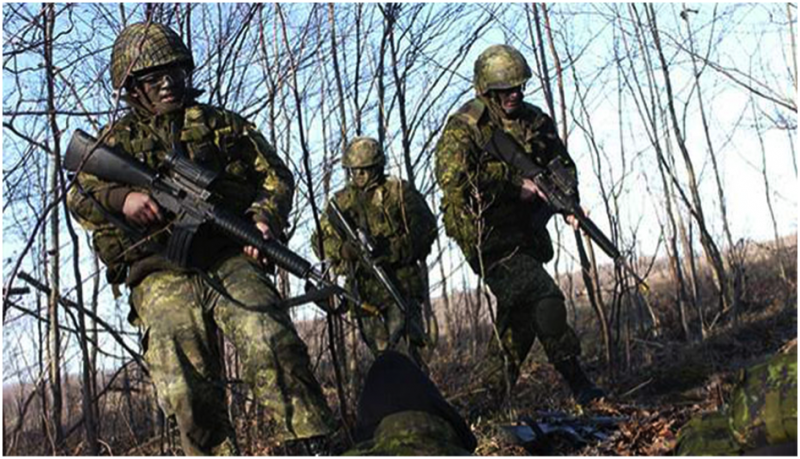 Toronto, ON — “We are not rich but we have access to privilege.”

Captain (Retired) Kevin Junior’s favourite saying originated with his daughter Shana when she was nine, but it could be the definition of his life.

“She made this observation after we watched the changing of the guard at Buckingham Palace. We were privileged to watch the event on the palace grounds because of my military rank, while everyone else watched the event from outside the palace gates,” explained Capt (Retd) Junor, who at the time was the Regimental Sergeant Major representing his regiment at the Queen Mother’s 100th birthday.

A deputy superintendent with the Ontario Ministry of Community Safety and Correctional Services, he was born in Birmingham, England to Jamaican parents. He said that his childhood was not an easy one, with a long separation from his parents, an international move and years in subsidized housing. In the mid-1960s, his mother left Capt (Retd) Junor and his siblings in their grandmother’s care in Jamaica to start a new life in Canada. Her children followed her to Scarborough, Ontario in 1973.

His mother’s leadership, along with his pastor’s guidance, is what led Capt (Retd) Junor to make good decisions during his teen years in spite of those challenging circumstances. “It was my upbringing: my mother made it clear that my role was to do as I was told, to go to church and school.”

A chance encounter with a Canadian Army recruiter from the Toronto Scottish Regiment (Queen Elizabeth the Queen Mother’s Own), opened the door to a world of learning and opportunity for Capt (Retd) Junor when he was 17. “The recruiter came to my high school because the principal was Lieutenant-Colonel (Retired) Horwood, former Commanding Officer of 25 (Toronto) Service Battalion. He said, 'I will give you a summer job for as long as you want it.' And I thought, 'Who would turn that down?'”

Capt (Retd) Junor’s initial plan, to quit the Army after that first summer, changed after basic training. “The comradery was huge. The challenge that I needed [at that age] was provided by the regiment. Also, there was the promise of doing different things,” he explained.

Capt (Retd) Junor remained with his Fort York Armoury-based unit for much of his career, living what he calls the double life of a Reservist. Along with rising to the level of Regimental Sergeant Major, his work with the public service took him first, in 1985, to the Ontario Ministry of Transportation as a senior business and policy adviser, and now with the Ontario Ministry of Community Safety and Correctional Services as an adviser responsible for use-of-force reports. He was also a deputy superintendent at Toronto’s Don Jail in 2012.

There is no doubt in Capt (Retd) Junor’s mind that the privilege of learning, which comes with serving in the Canadian Army Reserve, prepared him for a successful career in the public service. “The wonderful thing about the military is that it enabled me to develop behavioural competencies, ones that I couldn’t have developed at such a young age in other organizations. Competencies like leadership and strategic thinking. When applying for jobs, I would be thinking and performing at a higher level than most around me.”

Capt (Retd) Junor flourished in both realms of his double career, receiving many awards and promotions including the Order of Military Merit, the highest Canadian military decoration outside of combat; the Harry Jerome Award, which recognizes African-Canadian achievement; and the Amethyst Award, the premier award for the Ontario Public Service.

However, prejudice cast a shadow on Capt (Retd) Junor’s military experience. “I was with a Scottish Regiment so I wore a kilt for 34 years,” he explained, using a loaded pause to indicate that the colour of his skin as well as its contrast with his dress uniform inspired unkind actions from some military members. “I was surprised with the degree of racism from some of my comrades and my superiors. In Canada there is covert racism as opposed to America’s overt racism. That reality impacted me in the military.”

Once again, the Army provided Capt (Retd) Junor with a privilege: the power to do something about the name-calling, slurs and unacceptable behaviour. While he was Regimental Sergeant Major, he was asked to co-chair the Defence Visible Minority Advisory Group (DVMAG). During his five years in this capacity, the group addressed a number of issues on a national level. “Systemic barriers and blatant racism were addressed across the country from Vancouver to Halifax. And we did meet them head on.”

He is most proud of the changes that, though small, were significant for their effect on the lives of visible minority members of the Canadian Army. “The dress regulations stated that women could only have their hair in a bun at the back. For black women with multiple braids this was impossible. We got the rule changed.”

Now retired from the Army, Capt (Retd) Junor continues to speak for visible minorities in the correctional system and in his hometown of Caledon, Ontario. His future plans include assisting others in the Caribbean and Sierra Leone to experience the added privilege that he experienced as a member of the Canadian Army.

“I was blessed to break some barriers but not everyone is so lucky. It’s my mission to give a hand up, not a hand out.”

Born in Birmingham, UK and raised in Jamaica, Kevin began his military career with the Toronto Scottish Regiment at the age of 17. A CF recruiter at his high school promised Kevin he’d not have to wear a kilt.

After that, there was no looking back. Kevin’s distinguished 30 year military career saw him rise to rank of the Regimental Sergeant-Major, Army Reserves.

After a theology degree and a diploma as a civil engineer, Kevin began his “other” professional life as a Senior Business and Policy Advisor at the Ministry of Transportation.

He developed and delivered a number of innovative MTO programs to enhance change management for which he earned accolades from co-workers and supervisors.

In 2007 Chief Warrant Officer Junor deployed to Sierra Leone as one of 11 Canadians with Operation Sculpture—Canada’s contribution to the UN’s International Military Advisory and Training Team (IMATT).

Their task was to strengthen the skills and professionalism of the Republic of Sierra Leone Armed Forces at the time their military establishment was being reduced to a sustainable 8,500 personnel.

Kevin’s leadership and change management advice displayed in the programs he developed earned him a Chief of Defence Staff Commendation.

In northern Sierra Leone, Junor, an Assistant Minister at the North Peel Community Church, lectured with the passion of a preacher to soldiers who had no oil or blanks for their guns, shared boots and were partly paid with three cups of rice a day—when available.

MINUTE FROM READING  AND REMEMBRANCE 2011  PEACEKEEPING  AND PEACEMAKING : Soldiers from afar with their Canadian hearts

RSLAF Lance Corporal Kadijatu Kamara said of Junor, “He can do everything you can think of.

He makes us feel like we are all Canadians.”

Kevin Junor learned from his pupils as well. “They taught me what it was like to be a black man in Africa.

The people of Sierra Leone were warm and welcoming, and they gave continuously from what little they had. They did their very best and had personal pride.”

When Junor walked up the steps used by former slaves who returned from North America to Freetown he was touched. “To realize that not just Africans but my ancestors walked up those stairs to freedom ... I had to walk it myself.”

The RSLAF reform program advanced to such a degree that in July 2009 RSLAF deployed a sector reconnaissance company to serve with the United Nations-African Union Mission inDarfur.

Sierra Leone’s UNAMID contingent is now in its second rotation.