The First Black Footballer to Play for England 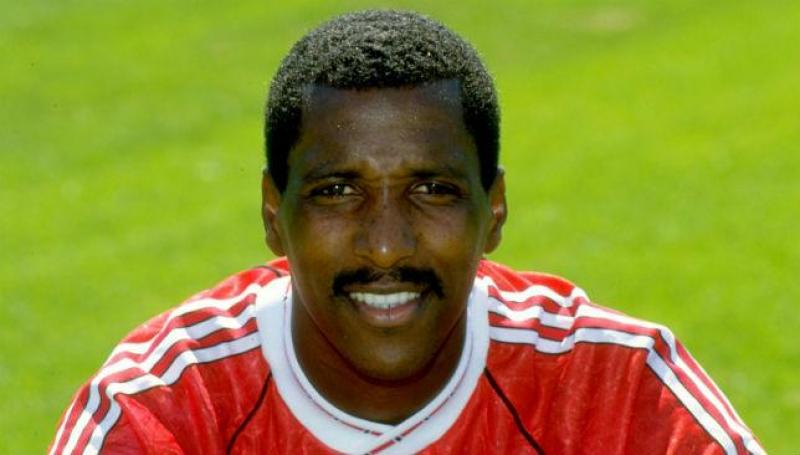 Today footballers of West Indian and African descendents are a familiar site in English football. For the most part, they are able to play the game as equals, and have had a significant role in shaping modern football.

However, in the 1970's and 1980's, black footballers were a rare sight. It took a brave wave of first and second generation West Indian migrants to break the mould. They faced discrimination and rampant racism from fans, but they helped change the face of football.

Foremost amongst these pioneers was Viv Anderson. The Nottingham Forest defender rose up to become the first black player to represent England. This feat would act as an inspiration for black footballers for years to come.

Viv Anderson's parents migrated from the West Indies during the first great wave of Caribbean immigration after the Second World War. They settled in the small town of Clifton in Nottingham, and Viv was born there in 1956.

Viv Anderson grew up in an atmosphere beset by racial tensions. The nation was still grappling with the increasingly diverse nature of the population, and discrimination in all aspects of life was commonplace. This was reflected in football. Clyde Best, a Bermudan striker who made his debut for West Ham in 1968, was a rare exception in an all-white industry.

Nevertheless, the young Anderson became deeply invested in football and showed great promise at the junior level. By the age of seventeen, he was recruited by his local club, Nottingham Forest.

The man who spotted his talent was the legendary manager Brian Clough. Clough was a maverick, a footballing genius who also spent much of his life rallying against injustice. He was chairman of the Anti-Nazi league, a group set up to combat racist organisation such as the National Front. He would in his time help start the career of numerous black players. He became Anderson's biggest supporter against the racist backlash he would face.

A target for abuse

Anderson started to establish himself in the Forrest first team in 1974. He was the only black player on the team at the time and therefore became an instant target for racist taunting.

In a match against Carlisle, Clough told Anderson to warm up on the side of the pitch. When Anderson did this, the hostile crowd threw bananas and vile insults at him. It would not be an isolated incident. The small number of black players elsewhere in the league often faced even worse mistreatment.

At West Brom, three black players emerged: Regis, Cunningham and Batson. Nicknamed the Three Degrees after the Motown group, they came in for particular vitriol from opposing fans. Regis even had death threats and bullets mailed to him. It reflected a dark time in British society: political and economic strife had been exploited by organisations like the National Front, who recruited white working class football fans on the terraces. Players like Anderson and Regis felt the brunt of it.

Indeed, it nearly forced Anderson into early retirement. He recalls how it was some wise advice from Clough that kept him sane:

"It was so hostile that I said to Brian Clough when I got back to the dressing room, 'I don't think I can play tonight boss'.

He told me in no uncertain terms I had to play. He said if I wanted to forge a career in the game I had to ignore these people, rise above the chants and let me football do the talking."

Anderson carried on, shrugging off the abuse to become a lynchpin of a hugely successful Nottingham Forest side.

By 1978 Forest had won the league, and Anderson was an integral part of this. His fine performances finally promoted England manager Ron Greenwood to call him up for the squad. Making his debut against Czechoslovakia, Anderson faced scrutiny from the press and disapproval from some extreme right wing elements of England's support.

However, Anderson was a consummate professional and concentrated on nothing more than putting in a good performance. He impressed on the pitch, playing well defensively and setting up the only goal of the game. He ended up getting a standing ovation from Wembley that night.

Anderson did not realise it at the time, but what he had just achieved was truly monumental. He had broken one of the great taboos of English football. In the process, Anderson opened the way for a number of black players to make their mark on the international stage. In the coming years, talents such a Laurie Cunningham, Cyril Regis, Luther Blissett and John Barnes would become a part of the England team.

Anderson hung up his boots in 1995. He could look back on a wildly sucessful career, wining two European Cups with Forest, before moving on to Arsenal and Manchester United.

However, his overall legacy would be more significant than his winner medals. In his playing career, he highlighted what those of West Indian backgrounds could achieve, and helped change perceptions. Furthermore, his exploits inspired countless young black boys to get into the game. This is a cause Anderson continued after retirement. He is now a high-profile figure within the Kick it Out campaign, which aims to extinguish the remnants of racism in the game.

Looking at the current England squad, it's clear that the nation has come a long way. The likes of Nathaniel Clyne, Raheem Sterling and Danny Rose will proudly represent England at the European Championships this summer. In fact, the squad named by Hodgson is one of the most diverse ever. For that, they can in part thank Viv Anderson and his fellow pioneers.