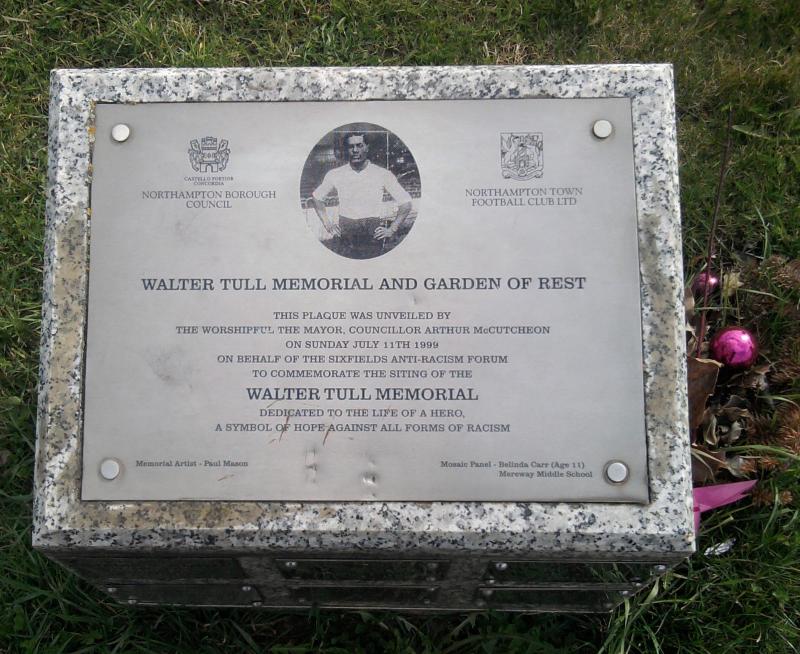 Picture the scene: A man lies pole-axed on the floor whilst his colleagues plead with a higher source to help him and fight off the enemy; a scene from a Manchester derby? No, this is the Somme, 25th March 1918, the war to end all wars; Walter Tull about to draw his last breath.

I first became interested in the story of Walter when I read an article in the popular football magazine 'When Saturday comes'. It left an impression on me as I had not heard of the name before and wanted to find our more about him. At that (pre-internet) time it was difficult to get any information, and visits to the library failed to locate any books written about him. So I put it on the backburner. The recent surge in support for him to get a posthumous gallantry award has revived my interest in his story and what a fascinating one it is.

Walter Tull, the son of a joiner, was born in Folkestone in April 1888. His father, the son of a slave had arrived from Barbados in 1876. In 1895, when Walter was seven, his mother died. Walter's father remarried but died two years later. His step mom was unable to cope with all six children and Walter (along with his brother Edward) was sent to an orphanage in Bethnal Green, London.

Walter excelled at football and played for his local team Clapton (now Leyton Orient). He was spotted in 1908 and went to play for Tottenham Hotspur. Walter settled at Spurs but his appearances were few. During an away game at Bristol City, Walter was subjected to racist abuse. The Spurs Management decided to drop him out of fear of more racist abuse. He was with Spurs until 1910 when he was transferred to Northampton Town. His career for the Cobblers (111 appearances lasted until the outbreak of the First World War.

On the 21st December 1914 Walter enlisted in the British Army, answering Kitcheners call and to serve his Country. Walter became the 55th member of the 'Football Battalion', specially formed between the War Office and the FA due to the popularity of the game.

During his military training, Walter was promoted within the ranks three times. In November 1915 he was sent to Les Ciseaux in France. In July 1916 he tool part in the major Somme offensive. He survived this experience but in early December 1916 he developed trench fever (Post Traumatic Stress Disorder) and was sent home to England to recover.

Whilst back in Blighty, his Superior Officers recognised his courage and abilities and recommended him as an Officer. Despite it being Boxing Day 1916, he commenced his training as an Officer. Even though there were military laws forbidding 'any negro or person of colour' being commissioned as an officer, Walter was promoted to Second Lieutenant in 1917.

Walter was sent to the Italian Front where he twice led his Company across the River Piave on a raid and both times brought all of his troops (26 men) back safely. He was mentioned in despatches for his 'gallantry and coolness' under fire by his Commanding Officer. His Senior Officer recommended him for a Military Cross...he never got it.

He stayed in Italy until 1918 when he was transferred to France to take part in the attempt to break through the German lines on the Western Front. On 25th March 1918, 2nd Lieutenant Tull was ordered to lead his men on an attack on the German trenches at Favreuil. Soon after entering into No Mans Land, he was hit by a German bullet. Several of his men made valiant efforts under heavy fire from German machine-guns to bring his back to the British Trenches.

These efforts were in vein as Walter had died soon after being hit. He was awarded the British War and Victory Medal and was recommended again for the Military Cross...he never got it.

Walter's body was never found and he is one of thousands of soldiers from World War One who has no known grave.

Northampton Town has never forgotten their World War heroes and (as well as a memorial) the new football stadium is built is on Walter Tull Way and Edgar Mobbs Way (another fascinating sporting life/WW1 story - Google it). I wonder if the many thousands of supporters that use Fast Food outlets on Walter Tull Way know of the significance and I also wonder if the folks that kick Colonel Sander's packages into the gutter know who Walter Tull was.

Whatever happens with the award of a posthumous medal, Walter's story deserves to be told and along with the thousands that died fighting for their Country - they all deserve to be remembered.