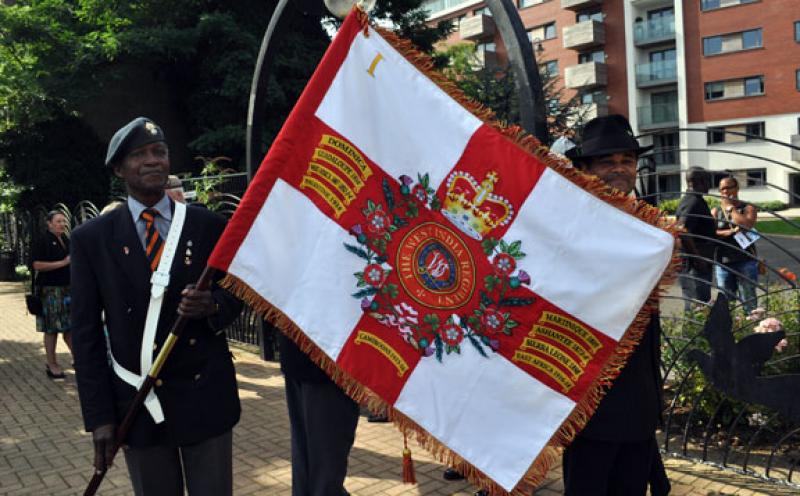 However following the collapse of the Federation in 1962, a decision was made to disband the Regiment for the second time, and as such new colours were never presented to the Regiment.

Some of the Soldiers transferred to Jamaica service to form the 1st Battalion of the Jamaica Regiment. Other serving soldiers who were not Jamaicans or Trinidaduans were given the option to join the British Army, Jamaica Regiment or Trinidad & Tobago Defence Force.

In correlation with the Royal Garter and JW Plant (The Flag Company) we have now produced the Standard of the Queen Elizabeth II West India Regiment of 1958 as originally designed, in silk, framed with a Red and Gold fringe.

The Standard formed part of the line-up at the 2012 Annual Memorial Service of the National Service Veterans Association at St Thomas' Peace Garden in Birmingham.

As both Jamaica and Trinidad & Tobago celebrate 50 years of Independence, and the Queen - Colonel in Chief of the Jamaican Regiment, celebrates her Diamond Jubilee, the Standard represents much more than the 132 years loyal service it was designed to display.

They shall grow not old, as we that are left grow old

Age shall not weary them, nor the years condemn

At the going down of the sun, and in the morning

WE Will Remember Them