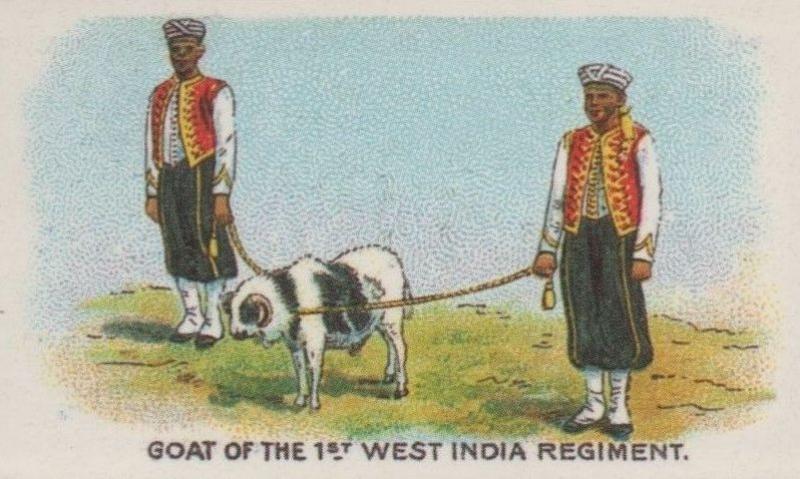 During a visit to the National Army Museum I came across a newspaper article related to the 3rd West India Regiment based in Sierra Leone.

Whilst preparing to leave Sierra Leone the soldiers of the West India Regiment came upon a goat and decided to claim him as their mascot. The goat happily accompanied them for several miles as they marched back to the dock where their boat was moored ready to take them back to Jamaica.

No matter how they tried the goat nicknamed 'Thembi' after the Region in which he was found would not board the boat and began head butting any 'Black Tommy' that came within striking distance.

After a while with no solution in sight a voice cried out "Gah fetch me di rum, quick nah". Within a few moments rum was being added to the goats water bucket. Thirsty from his head butting exploits Thembi gulped down the mixture. Subdued he boarded the boat and settled down on a bed of straw to sleep.

Arriving at Up Park Camp, Jamaica Thembi was given the freedom of the camp but soon found himself in disgrace after eating the prize winning flowers outside the hospital. He was ordered back to barracks at the delight of the soldiers who cared and looked after him for the rest of his life. It should also be noted Thembi was never again found to be drunk on duty.